BASS Insider's Basslog is a database into which fishermen can post the conditions of their catches on the Internet. Once the conditions (date, lure, time period, structure, cover, etc.) are recorded, the Basslog returns useful patterns, thanks to the combined input of other users.

With more than 2,100 registered users, the Basslog is beginning to produce interesting and valuable data about fishing lures and techniques. For example, 10 percent of bass registered in the database were caught on skirted jigs, usually adorned with some sort of trailer.

These lures are famous for catching giant bass. Knowing when and where to throw them could help you catch that bass of a lifetime.

An interesting statistic I just learned from the Basslog is that most jig fish are caught under clear conditions. And more than twice as many fish caught on jigs were caught under sunny conditions as compared cloudy skies. Another interesting stat is that most jig fish were caught in very cold water or 70 to 80 degree water. See the graph below for details. 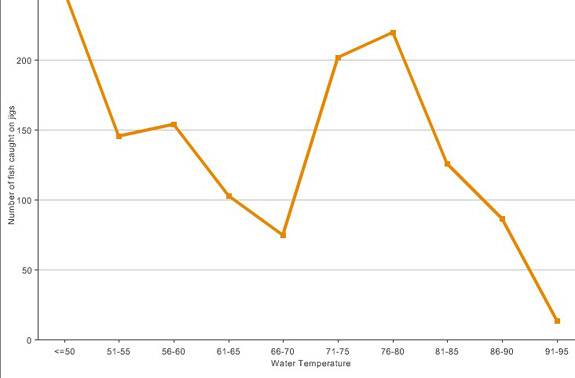 The time of day was definitely a factor for catching fish on skirted jigs. By far, the best time period was 9 a.m. to noon. The next closest periods were just before and after that period. As the day progresses, less fish were recorded for each period. The midnight to first-light period had the least amount recorded, but the average weight was biggest then. See the graph below. 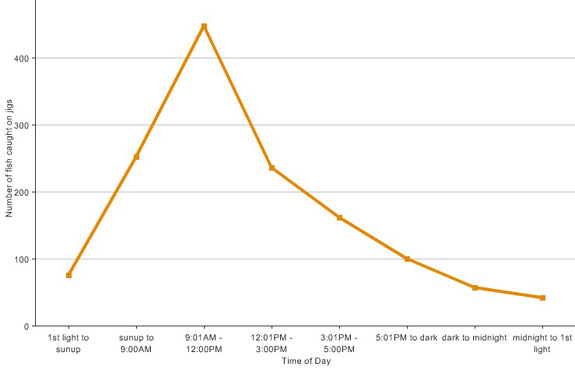 Vegetation was the best cover, with wood and rocks taking second and third. The best structure was shallow water with some type of drop nearby. The best depth was 6-10 feet, with just about as many fish in 5 feet or less. Most of the fish were caught in stained water (1-2 feet visibility), while semi-stained (2-3 feet visibility) had just about as many. The wind was a factor. More fish were caught on days with less wind.

The Basslog recorded 20 different skirt colors for jig fish. The top 3 were (in order) black/blue, green pumpkin, and brown. The best sizes were 3/8 ounce, 1/2 ounce, and 1/4 ounce. By far, most fish were caught with a plastic craw trailer. However, many were also caught with creature and grub trailers.

In summary, jigs work best on relatively calm, sunny days from sunup to noon. The best jig water is either very cold or 70-80 degrees, less than 10 feet deep with 1-3 foot visibility and some type of vegetation, wood, or rock. The ideal structure is a shallow flat with a drop nearby.

Most popular choices are 3/8- to 1/2-ounce black/blue jigs with black/blue plastic craw trailers.

For more details, consult the Basslog here on BASS Insider, where you can learn which combinations to use under each condition. Additionally, the Log is full of information that I didn't cover. It holds an exhaustive list of most every type of lure you can catch a bass on — and jigs are only a small portion of the list. Best of all, you can use the Basslog to record your fish and you can learn from your own success as well as from other Insider members. You should definitely use the Basslog to record your own fish. The sooner you start, the more useful it will be. Even if you only catch a handful of fish per year, you can establish your own patterns over time. It is well-known that bass are pattern oriented. Learn the patterns and catch more fish!

I fish 200+ days as a fishing guide on one of the best lakes (Lake Fork, Texas) in the country. How I wish I had such a tool 20 years ago! I discovered how to find patterns by spending countless hours reading articles from biased authors and spending tons of hours on the lake. At last, we can all learn from our own trials as well as from the collection of over 2,100 fishermen.